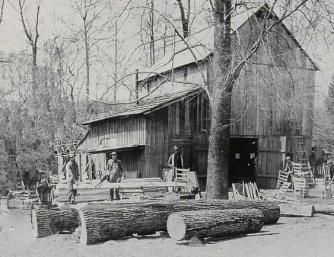 Since 1834, six generations of the Hinkle family have been making quality hardwood furniture at the same location in Springfield, TN.

The Rev. Anthony Jacob Henckel emigrated from Germany in 1717 with his wife Mary Elizabeth and their eight children, settling in Germantown, PA near Philadelphia. The spelling of their last name was changed from Henckel to Hinkle in 1797. In 1803, Rev. Henckel’s great grandson Anthony and his wife Catherine Nancy Frey moved their family to Robertson County in northern middle Tennessee. The last of their eight children, Andrew Hinkle, was born in 1815 and is recognized as the founder of Hinkle Chair Company.

Andrew Hinkle was a farmer, but he and his family supplemented their income by making ladder back chairs. During the hot summer months the family would hand carve chair frames out of oak, hickory and beech. During the winter months when the crops had been harvested and the fields were laid by, the family worked indoors weaving the seats using hand cut strips of various hardwoods and assembling the finished chairs. Andrew and his wife Catherine had twelve children; among them was Henry Ywell who was born in 1860. Henry Hinkle continued in his father’s footsteps, farming during the growing season and producing ladder back chairs during the cold winter months to help support the family. Henry and his wife Eva had five children, including Willie Bell who was born in 1896.

Willie Bell Hinkle wed Ellie Mae Clinard in 1915; they continued the family tradition of farming and making chairs. As demand for their products grew, the family gave up farming in 1932 to produce chairs full-time. A small country store and a tobacco barn served as a makeshift factory and as production increased rocking chairs were added to the line of products. William Winford Hinkle was born to the couple in 1917.

In 1946, William (Cat) Winford Hinkle Sr. returned from serving in World War II and bought the business from his father. He married Ora Sue Smith in 1949 and they had three children. By then, Hinkle Chair Company had sixteen full-time employees and could produce over two hundred chairs a day. The operation moved from its cramped facilities into two buildings which were used exclusively for manufacturing.

In the 1980’s, as the company grew, several new buildings were added including a show room and new finishing system. New styles of rockers and chairs were added to the product line along with dining room tables, hutch and buffets. In 1990 after the death of his father, William Hinkle Jr. took over as CEO of the company and today along with his brother Jeff and sister Diane, Hinkle Chair Company is still a family owned and operated business. A sixth generation was welcomed to the company in 2014 when William’s son, Brad Hinkle came on board.

In 1996 the company broke ground on a new production building and followed in 1997 with a state of the art finishing facility. These additions have enabled us to increase our rocker production as well as offer new and exciting furnishings for your home. Remember, whenever you purchase your next rocking chair, insist that it is a genuine Hinkle rocker. The quality and comfort of your Hinkle products are carved out of over 176 year old tradition.

Personalize your next rocker

Available on all products

Get In Get Exclusive Offers

Be the first to find out about exclusive deals and top design trends with Hinkle Chair Co.

Be the first to find out about exclusive deals and top design trends with Hinkle Chair Co.